Start the trip from tana after morning breakfast to Ankarafantsika or formerly known as Ampijoroa Forest Station. It lies along the R4 highway connecting Tana and Mahajanga (Majunga). The road is in good condition and you will see mangos trees on side of the street. Ankarafantsika Park is one of the largest and last remaining sections of dense dry deciduous forest in Madagascar. The park has a surface of almost 1,350 km² and it is a den of birds and lemurs. A night walk is usually exciting and rewarding and one may find Milne-Edwards sportive lemur, mongoose lemur, western wolly lemur, grey mouse lemur, fat-tailed dwarf lemur, and it is the only place where the golden-brown mouse lemur occurs.

Recommended accommodation : overnight at bungalow at the park or stay at blue vanga hotel . ( bed and breakfast is included )

Today, you and your local personal guide from the park will hike and visit this beautiful park as much as possible since it’s huge and has different circuits. 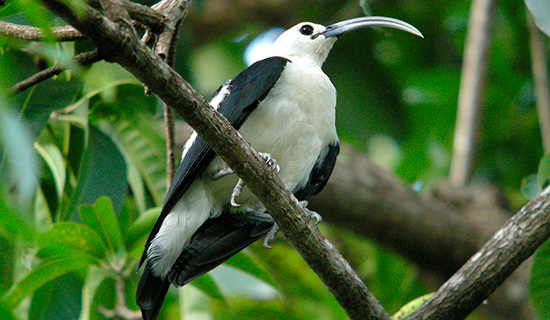 Ask your guide the best circuits which is fit for you. Ankarafantsika park is home to eight lemur species. During the day Coquerel's sifaka are commonly seen. And it is also one of Madagascar's finest bird watching venues with 129 species (75 are endemic) such as the banded krestel, Rufous vanga, Van Dam´s vanga, Madagascar fish eagle. 10 frogs and 45 reptiles are found here, like Oustalett's, dwarf, horned and Rhinoceros chameleons, several vulnerable snakes, the extremely rare Madagascar big-headed turtle and even crocodiles around the lake. The flora is rich as well. More than 800 species grow in Ankarafantsika, with a high rate of endemism. Night walk can be organized through your guide too.

Recommended accommodation : overnight at bungalow at the park or stay at blue vanga hotel . ( bed and breakfast is included )

Start our journey in the morning from the park to Antsohihy. The ride takes about 7 hours on paved road . In Antsohihy has no special interest thing to do for tourism but here is the place to break from long journey.

After morning breakfast, drive from Antsohihy heading to ankarana park. You might have about 6 hours since there is some bad road between ambilobe to Ankarana park. The road crosses never ending plantations of sugarcane, ylang ylang, cocoa, coffee, pepper, crove, cinnamon and vanilla. While you arrive in Ankarana Park, you just take the room and relax to wait for the visits tomorrow. 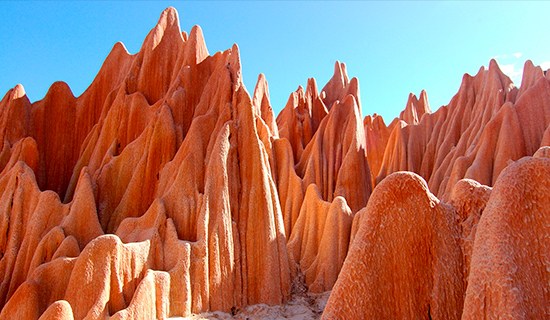 This park is home to 100 bird species, 50 reptiles (including some endemic and threatened snakes and geckos) and 10 frogs cohabit in the Park. Inside the spectacular and huge labyrinth of caves 14 bat species then back to the hotel and have lunch before heading to mountain of amber. We will take a look at the red tsingy on route.

Today, you’ll have half day for exploring the Amber Mountain National Park. This is one of the most popular hiking parks. Splendid scenery, including lush mountain rainforest, crater lakes and the best view of waterfalls. Amber Mountain is an isolated patch of mountain forest that rises from the surrounding dry region. You will see some lemurs (crowned and Sanford’s); birds (look for Madagascar crested ibis and white throated oxylabes) and various reptiles. After the visits, return to the jeep and will drive to antsiranana and stay in the city to allow you taking a walk by your own.

After the morning breakfast, Car from the hotel to the place where you will take motor boat to Emerald sea island which is such nice beach and provides an ideal environment for an amazing underwater fauna. Discover the preserved beaches, We provide your sea food for lunch during your excursion at Emerald Sea. Then back to the main land at the hotel in the afternoon.

ANTSIRANANA TO ANTANANARIVO BY FLIGHT .

Our hotel in antsiranana will transfer you to the airport then you will fly from antsiranana to tana. Please confirm to us if you want to relax on the beach in nosy be and want us to drop you to ankify where you will take motor boat to nosy be .

Note : The main way of leaving Antsiranana is by plane to Tana or to nosy be island and you can purchase these local flight tickets through our agency. If you are already in nosy be and want to take the north tour, take a look at this page and require your trip to Mr Benjamin.

ANKARAFANTSIKA NATIONAL PARK (formerly known as Ampijoroa Forest Station) : is one of the largest and last remaining sections of dense dry deciduous forest in Madagascar, filled with critically endangered and endemic species. The park lies about 450km north from Tana covering a surface of almost 1,350 km², and it is bisected by the R4 highway. Ankarafantsika is the last refuge of several lemur and bird species and it is home to eight lemur species: a night walk is usually exciting and rewarding and one may find Milne-Edwards sportive lemur, mongoose lemur, western wooly lemur, grey mouse lemur, fat-tailed dwarf lemur. During the day Coquerel's sifaka are commonly seen. The Park is also one of Madagascar's finest bird watching venues with 129 species (75 are endemic) such as the banded kestrel, Rufous vanga, Van Dam´s vanga, Madagascar fish eagle. 10 frogs and 45 reptiles are found here, like Oustalett's, dwarf, horned and Rhinoceros chameleons, several vulnerable snakes, the extremely rare Madagascar big-headed turtle and even crocodiles around the lake. The flora is rich as well. More than 800 species grow in Ankarafantsika, with a high rate of endemism. Some significant species are the Cedrelopsis grevei, an odorous medicinal tree used, baobabs, palisander, wild vanilla, retendrika, crocodile tree, lohavato or the sakoanala tree, all of them endemic. Ankarafantsika can be visited during all the year. The road is in good condition. During the dry season (April to November) it can be really hot here, so do not forget to bring a hat and warm clothes.

ANKARANA NATIONAL PARK : It was created in 1956 and lies about 90 km south of Antsiranana covering an area of 182, 5 km². It is a spectacularly eroded limestone fortress of sharp ridges, patches of dense tropical jungle, deciduous forest, deep caves and canyons and rushing rivers. With an annual rainfall of almost 2000 mm, the underlying rocks undergo heavy erosion producing amazing karst topography, being it’s most known result the fantastically eroded limestone spires, known as “tsingy”. The Park is in fact one of the most visited specially among hikers. It offers incredible trails, unique and terrific landscapes and a lot of animals! This reserve contains one of the highest densities of primates of any forest in the world. Its dense forests support one of the largest and least disturbed populations of crowned lemurs. Sanford's brown lemur, Perrier’s black lemur, northern sportive lemur and dwarf lemurs, ring-tailed mongoose, fossa, tenrecs and Madagascar striped civet are also a common sight. Almost 100 bird species, 50 reptiles (including some endemic and threatened snakes and geckos) and 10 frogs cohabit in the Park. Inside the spectacular and huge labyrinth of caves 14 bat species, local endemic blind shrimps and the world's only known cave-living crocodiles are waiting for your visit. At night swarms of bats and flying foxes swoop in the darkness.

RED TSINGY : These tsingy are made of red laterite (similar to clay) and not of limestone rock like the tsingy at d’ankarana. They are caused by land / mud slides during heavy rain, which is regular in these parts. The effect of burning land that pro voc deforestation and erosion result because of rain season, and becoming imaginary and impressive view of that site are forming the scilicet (sand), late rite (land) and argil .

AMBER MOUNTAIN NATIONAL PARK : is located around 30 km south of Diego Suarez. It was established in 1958 and protects a total surface of 185km². This massif rises from the surrounding dry region forming an isolated stretch of mountain rainforest covering an area of 18.200 hectares and lying at altitudes between 800 and 1.470 metre. The park offers a great biodiversity, a huge tropical forest with endemic fauna and flora, luxuriant vegetation and many waterfalls and volcanic lakes. The climate is perfect, the cool air refreshes after the heat of the lowlands. The dominant ethnic groups are the Sakalava and the Antankarana. This park homes about 25 species of mammals, among them 6 carnivores such as the ring-tailed mongoose and the fossa, and 8 lemurs: Sanford's brown lemur, crowned lemur, lesser bamboo lemur and are five species of nocturnal lemurs. Besides these forests are the home of 75 different bird species (35 of which are endemic and even locally endemic, like the Amber Mountain rock-thrush ), 60 reptiles, such as tiny stump-tailed chameleons, leaf-tailed geckos and snakes, 35 frogs and more than 40 butterflies. The flora is very reach as well.

ANTSIRANANA (Diego Suarez) :is the capital of Madagascar's northern most provinces. It has one of the world's most beautiful deep-water harbors, complete with a photogenic sugarloaf mountain. Visitors usually love this city, which is probably the most French city on Madagascar. It has this colonial feel over it. This is the largest city of the north with a huge cozy market, a range of fine restaurants and some fantastic places and national parks to visit nearby. Diego is the perfect place to hang around and prepare for visiting the neighborhood. 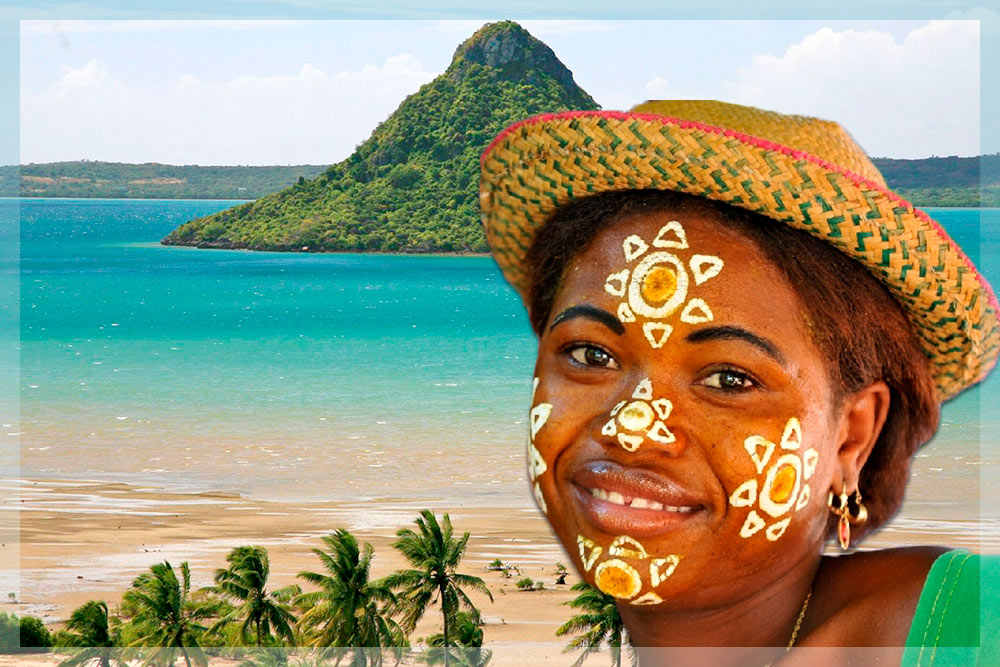